Primarily, a patent is used to legally block a competitor from replicating an invention.  Patents have other uncommon uses as I’ve described before.  One example was the Scrub Daddy, who used patents to help secure an investment on Shark Tank and become what is now a $40-million-dollar company, which you can read about here.
U.S. Patent No. 9,265,983, Exercise apparatus for assisting in strength exercises, or better known via its commercial name, The Sling Shot, is a resistance band that stretches across the user’s chest as the user is about to do a pressing motion.  The Sling Shot is designed to mitigate a load on the user’s shoulders as the user’s moves out of the fully eccentric position while maintaining proper form.  The Sling Shot is simple in design - the arm cuffs are elastic and the middle connecting portion is relatively inelastic, thereby preventing elbows from flaring out and providing a modicum of assistance in concentric direction.  Its primary use appears to act as a physical therapy aid while helping users increase their pressing motion loads with decreased forced being placed on their shoulders and elbows.  See Figures 3 and 4 from U.S. Patent No. 9,265,983 below which show a fully concentric position and a fully eccentric position, respectively. 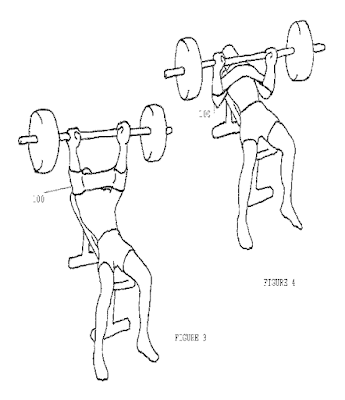 The inventor is Mark Bell, whose company is Super Training Products LLC.  The website selling the Sling Shot, https://markbellslingshot.com/, has many other products, including hip bands, elbow sleeves, knee sleeves, and other exercise apparel.  It may be that Mark Bell is not aggressively pursuing competitors copying his Sling Shot based on his social media and YouTube posts; so why get a patent?
The patent for the Sling Shot serves a variety of purposes outside of the traditional legal protection.  Similar to the Scrub Daddy patents, it could help Mark Bell secure an investment.  The other benefit of the Sling Shot patent is it provides a form of legitimacy.  The patent demonstrates to the consumer that he was the first to come up with the idea, which may further demonstrate a greater understanding of the problem being solved.  Further, when so many products are purchased online, the patent may give his product a “realness” compared to other products without a patent that a consumer may believe to be cheap and poorly constructed and fake.  Very likely, the patent in combination with his social status are sufficient to differentiate him from the competitors copying his product.
Furthermore, the Sling Shot patent may function as an umbrella, with Mark Bell’s other lines of products viewed under the same shadow.  Thus, a customer visiting his site and realizing they have no need for the Sling Shot may still be inclined to purchase his hip band or other products, despite his products being more expensive.  Why? Because the patent may elicit a feeling of trustworthiness; Bell researched and developed the Sling Shot and likely took a similar approach with his other products.  Thus, even if his hip band is more expensive or identical to other hip bands, the customer may believe Mark Bell’s hip band is better than other due to his Sling Shot patent.  In this way, Mark Bell may be using the Sling Shot patent as a marketing tool, allowing him to differentiate his Sling Shot and other fitness products from competitors without using the legal protections afforded to him via the patent.
Product