October 16, 2017
Guitars are one of the most commonly used instruments in modern music, evolving from ancient stringed instruments.  The basic principle of how these instruments work has remained the same: as guitar strings vibrate, they produce sound.  An acoustic guitar amplifies the sound of the strings via a soundboard (the top surface of the acoustic guitar body) and a sound box (a hollow cavity within the acoustic guitar body).  The first electric guitar was patented in 1937 (US 2,089,171), which arguably transformed not only the guitar, but music as we know it.  Electric guitars use a pickup to convert the string vibrations into electrical signals, which can be amplified and projected over a speaker.  Because electricity is used to amplify the sound of the electric guitar (and not the guitar itself), modern electric guitars typically lack a soundboard and a sound box, allowing them to have a thin, solid body, which makes them more comfortable to play. 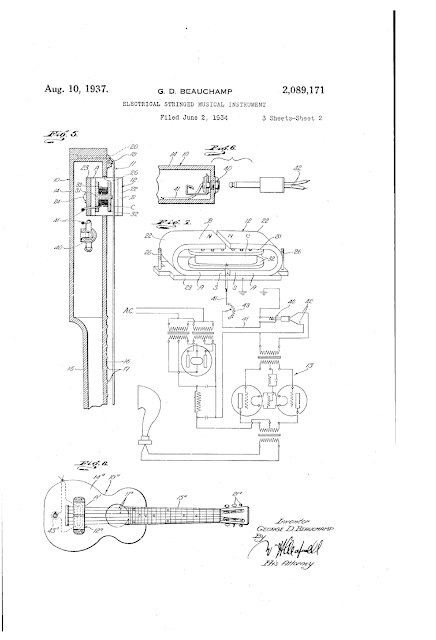 For many years, if you wanted to play a solid-body guitar, your only choice was to play electrically, which meant purchasing a guitar amplifier and plugging in whenever and wherever you wanted to play.  In a sense, solid-body guitars were limited by the very technology that made them possible: electricity.
Fender Musical Instruments Corporation identified this limitation and engineered a solid-body guitar that can be played without electronic amplification.  Fender’s solid-body acoustic guitar includes a small sound box and a soundboard.  However, unlike a traditional acoustic guitar, the body is formed of a single solid material instead of multiple thin sheets, similar to a traditional solid-body electric guitar.  Additionally, unlike traditional acoustic guitars, the body itself does not define the soundboard.  Instead, the soundboard is a separate piece attached to the solid body.  These distinctions enabled Fender to patent its solid-body acoustic guitar (US 7,151,210).
The soundboard itself is the key to the instrument and is so unique that its construction has its own patent (US 5,333,527).  Whereas acoustic guitars traditionally have a wooden soundboard, Fender’s solid-body acoustic guitar has a graphite epoxy composite soundboard, which can be made much thinner than a wooden soundboard while maintaining desired acoustic properties.  The thinness of the graphite epoxy composite soundboard allows the volume of the sound box to be maximized (increasing the loudness of the sound produced) while the overall size of the guitar is minimized (increasing comfortability).
These Fender patents show that advances in materials, not just advances in electronics, have the potential to evolve the modern guitar as we know it and overcome limitations of the instrument.  Because these patents give Fender exclusive rights to produce its solid-body acoustic guitar and graphite epoxy composite soundboard, other guitar manufacturers may be encouraged to evolve both acoustic and electric guitars in other ways.  These patents also highlight how innovation can come from figuring out how to combine desirable properties that appear to be mutually exclusive at first glance (in this example, a solid-body guitar and acoustic sound production). Often, If you are able to achieve benefits that originally seemed mutually exclusive, that is a strong sign that you may have just made a significant invention.