July 22, 2021
During patent prosecution, practitioners address the various rejections under different statutory sections one at a time. This makes sense since the different rejections stand on their own, and different arguments/rules apply. While sometimes there are overlapping issues, generally most examiners judiciously apply the grounds when they feel the facts warrant such application. However, from a strategic point of view, one can often learn a lot by considering the rejections together.
In particular, some examiners (e.g., those that tend to be more intent on rejecting applications no matter the facts) do not simply go through the claims and various statutory provisions and apply them independently. Rather, as an example, some examiners, upon realizing that their best prior art rejection is still missing certain explicit claim elements, go back and suddenly find that certain claim elements are unclear (112), unsupported (112), etc. In other words, it is generally not a coincidence when the very element a practitioner identifies as differentiating the cited art turns out to be aggressively attacked by the examiner for procedural, formality, and every other reason one can think of relating to clarity, support, indefiniteness, etc.

An example of this in the footwear arts is 15/223,048. The invention relates to Fitflops’ (TM) (see www.fitflops.com) application for a method of molding a part of an insole or a sole of a shoe. The patent application provides for different densities which cause the user to wobble and thus constantly react so that muscle tone is increased.

Claim 16 is reproduced below. Among several issues on appeal, claim 16 was rejected based on a combination of references, but also under Section 112. According to the rejection, the coplanar features were unclear because the claim did not specify which portions of the sole are relied upon to define the portions that are planar with one another. Further, the examiner alleged that claim 16 was rejected because the figures of the application show that the portions of the toe/heel region are curved, and thus not planar with other regions. Further still, the examiner asserted the specification did not support the claimed coplanar features being present without a force being exerted. 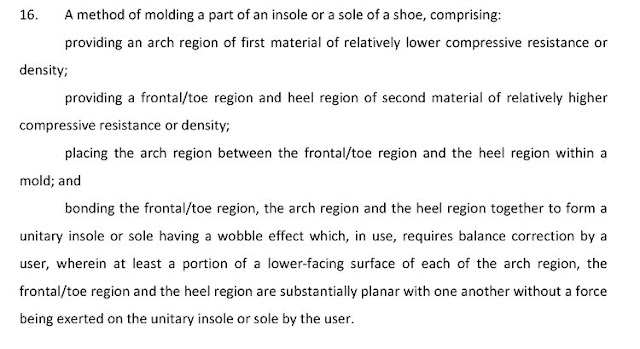 However, the figures and specification were clear on the 112 issues. For example, the specification explained that the unitary sole 2 included three regions (4, 5, and 6) and the lower portion 2C of the sole included all there of those regions. And, the figures showed the sole without the force of a user’s foot. 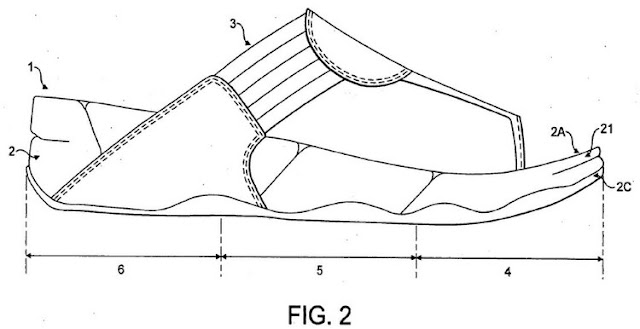 In the end, on appeal the PTAB agreed that the claim elements were clear and not found in the cited art. However, had the examiner been able to convince the PTAB that any one of the issues created lack of clarity or support, then the rejection could have been maintained. One might guess that is precisely why some examiners take this approach when trying to maximize pressure on the applicant to give up or further amend.

Another example is related to Shoot-A-Way’s application for their basketball practice machine (15/419,760). The claims focused on how the controller controls ball ejection based on a location pattern entered by the user. Claim 1 on appeal is reproduced below:

The examiner could not find prior art that showed programming passes according to an order of selected locations corresponding to shooting locations on the playing surface. The examiner was relying on inherency in prior art that has a threadbare manual programming mode, but that gave no other details. Recognizing the weakness of the art, it should come as no surprise that those very limitations missing from the prior art turned out to be "unclear” and “improper” according to the examiner. Specifically, the examiner argued that the “individually selectable locations” was indefinite because it was “unclear what structure is encompassed by such language.” Further, the examiner argued that the “were touched” aspect was improper because it was in the past tense and

Already, one can see that it is no coincidence that the very limitations related to novelty over the cited art just so happen to be unclear and indefinite.

So, be aware of the interplay among rejections. And when you see a certain limitation attacked in what seems to be an over-exuberant fashion, look hard because that limitations may very well be the key to differentiating the prior art.
interplay patent patent law rejections