Food processing technology is an active area for patent filings. Even the fundamental concepts of a new restaurant can be the subject of patent protection. Today we tell the story of one such patent as gleaned from publicly available documents and other on-line resources.
The story of US Patent 10,528,915 (Sanadidi, et al.) issued January 7, 2020 is that of a father and son inventor team who start their own restaurant (Bella Pita) in the LA area (there are two locations). M. Y. Sanadidi and his son Ezedin co-invented the idea for the new Mediterranean-style restaurant, which they opened in 2007. As M. Y. explained, they wanted to do something different:

“… we [] resolved to determine whether there was any innovation that we could bring to the field of Mediterranean-style restaurants that would make us stand out from the many other restaurants of this type.”

It turns out M.Y. was a professor of computer science at UCLA and an inventor on several patents related to computer networking. However, this new foray into the world of food processing patents probably educated him on how difficult the patent office can be for inventors in the field of food processing, as compared with computer networks.
Back to M.Y.’s story. The father-son team needed to do their research and find their new concept. After considerable effort, M.Y. and Ezedin conceived of a new way to make pita sandwiches, where the filling is placed on uncooked dough and then everything is baked together, with sauces being added into the baked pockets according to the customer’s wishes after baking. The inventors confirmed that no other restaurant had ever used this approach and so decided to start two restaurants using the new process. The advantages of this approach were summarized by M.Y. as follows: 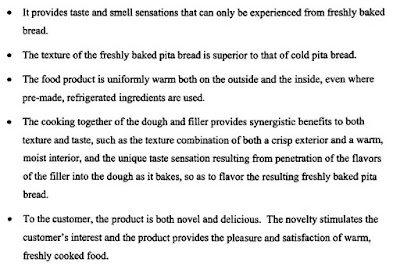 So the father-son team filed a patent application on their new invention. However, they learned that working their way through the USPTO can be time consuming, lengthy, and difficult. They even had to appeal their case in order to finally convince the Office to allow their application, which finally resulted in the issuance this month.
As this case shows, new concepts in food processing and preparation are an active area for patent filings, and such filings can even aim to protect the fundamental concept for a new restaurant.