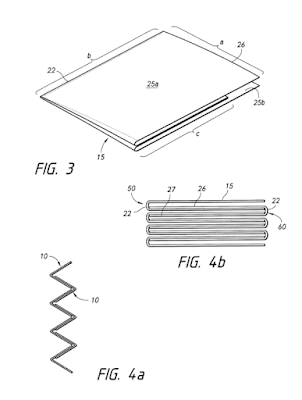 Have you ever read an article about a new patent, or seen a patent number on a product, and thought to yourself, “You can patent that??”  After nearly eight years in the intellectual property field, I’ve read some patent applications that were real doozies, but rarely do the really “out-of-the-box” ideas make it all the way to being a granted patent.  Consider, for example, napkin folding.  Is napkin folding an area of intellectual property that is hotly sought after?  It turns out, yes it is, as highlighted by three inter partes reviews (IPRs) that were recently entered by the Patent Trial and Appeal Board (PTAB).
In February, the PTAB entered three IPR decisions relating to three patents owned by Essity Hygiene and Health AB and all directed to folded napkins (8,597,761, 8,273,443, and 9,320,372).  Did you just ask yourself, “Someone got not one, not two, but three patents to folded napkins?”  Because I did.  But all  joking aside, not only did Essity own three folded napkin patents, but also one company (Cascades Canada LLC) thought that it was worth the costly and intensive effort to knock these patents down—highlighting that folded napkin patents are valuable.
For example, claim 1 from 8,597,761 recites:
A stack of interfolded absorbent sheet products, comprising:
a plurality of absorbent sheets
wherein each sheet comprises a first fold that is offset from a line bisecting said sheet substantially parallel to said first fold, and an interfolding fold that is substantially perpendicular to said first fold,
wherein the first fold is unidirectionally peaked,
wherein panels defined by the first fold of each sheet directly contact each other, and
wherein at least one of the panels defined by the interfolding fold of each sheet is inserted between two panels defined by the interfolding fold of another sheet in the stack.

Unfortunately for Essity, the IPR decisions did not go their way, as all three of their patents “folded” under pressure from Cascades and the prior art cited in the petitions. On the upside, the prior art used to invalidate the three patents is owned mostly by Essity, so at least for the time being, Essity still maintains at least some share of the napkin IP landscape.
So what is the take-away? Well one lesson I learned from reading the patents and IPR decisions is that even mundane-sounding technology can be relevant and have value to multiple companies.  But the flip side is that it appears Essity had not innovated in its napkin technology over the last 10-20 years and had essentially tried to gain coverage for embodiments discussed but not claimed in their earlier filings, but without the benefit of continuations or other priority claims.  Such a strategy is obviously risky, and especially if your patents pose any market barrier to your competitors.
General Knowledge