November 08, 2017
In recent years, demand for smaller, more portable digital cameras has largely been driven by the rapid expansion of online social networking as a method for quickly and conveniently sharing photographs with a wide audience.  Consequently, smart phone technologies have increasingly been developed to push the boundaries of digital photography, bringing greater access to high-quality cameras to a growing number of users.  Various producers of smart phones, such as Apple and Samsung, often distinguish their high-end smart phones from less expensive base models by including enhanced photographic features such as higher-quality optics, increased photo storage capacities, increased image resolutions, etc. Although such enhanced features are often enabled by specific hardware included by the phones, the increased interest in the photographic capabilities of such phones has led to a surge of IP activity for software targeted toward digital photographic image processing.  However, existing software IP for some applications, such as facial recognition for electronic surveillance, may significantly overlap with developments in the smartphone camera arene, and care must be taken to avoid prior art conflicts.

One method that some patent applicants have utilized to attempt to circumvent potential issues with prior art and increase a likelihood of a success for patent applications is to develop photographic image processing methods that are reliant on the mobile characteristics of a smart phone for image enhancement.  For example, Snapchat, Inc. was recently granted U.S. Patent 9,225,897 detailing methods for enhancing photographs taken by a smart phone based on location parameters of the smart phone at the time the photographs are taken.  Snapchat has adopted a relatively general approach in this regard and provides a few broad examples within the patent to define the scope of the invention. Particular attention is given to examples in which branding imagery is applied to photographs based on the geolocation of the smart phone at the time the photographs are taken, as illustrated by FIGS. 6-7 below, by enabling the software to recognize and alter an appearance of specific environmental elements within the photographs.  Perhaps an ultimately more compelling example, though, is that illustrated by FIG. 5, wherein the software suggests photo filters to the user to alter an overall appearance of the photographs based on the geolocation.  The patent describes a beach as one exemplary geolocation, with the photo filters serving to enhance an appearance of the surrounding water, sand, and/or sky. By connecting the image processing method to the geolocation of the smart phone, the patent may be better able to overcome prior art that instead applies filters based on intrinsic properties of the photographs, such as color cast, average luminosity, etc. 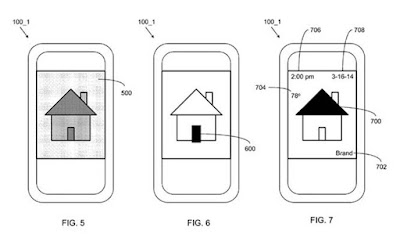 Another approach is shown by IBM Corporation in U.S. Patent 9,716,827.  The patent describes methods for utilizing the geolocation of a user to provide suggestions for adjusting photographs, somewhat similar to the Snapchat '897 patent described above.  However, rather than providing photo filter suggestions to the user based entirely on the geolocation, the IBM patent provides a more social approach toward image processing.  As a user prepares to photograph a subject, the smart phone searches a variety of online social networks for photographs from other users taken at the same geolocation, and attempts to narrow the identified photographs to a subset of photographs of the same subject viewed by the user with similar lighting conditions, weather, etc. (as shown by FIG. 9, below).  The smart phone then provides various suggestions to the user, such as adjustments to composition, based on the online photographs that have received the greatest amount of positive feedback. 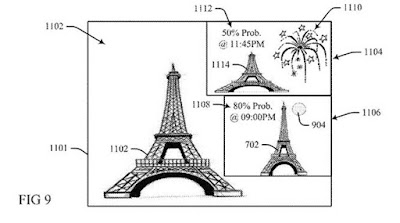 From a photographic perspective, the IBM methods may foreseeably even expand past the Snapchat methods, with the enhanced photographs attained via Snapchat being able to provide an increased wealth of online resources for utilization with the IBM methods.  And, from an IP perspective, both the Snapchat and IBM patents pull from advances specific to smart phone hardware to provide interesting new approaches to image processing.